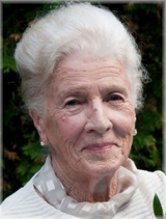 BIRCH, Margaret - Passed away peacefully on October 29, 2020 with her loving family at her side.

She was a remarkable, kind and generous mother, grandmother and good friend.

Married in 1941 to newspaper reporter and editor Guy Birch, they settled in Scarborough in 1957 with two children.

Margaret started her community activity as a volunteer at Scarborough General Hospital and became Chair of the Scarborough board of health 1963.

In 1970, she was chosen Scarborough's citizen of the year and was asked to run, and won, the 1971 provincial election PC seat for the riding of Scarborough East under the slogan 'Margaret Birch Cares'.  She was re-elected four more times through 1981.  As a backbencher, she helped found the Youth and Senior's Secretariates.  In 1973, she was appointed Minister without Portfolio by Premier Bill Davis, making Margaret the first female cabinet minister in Ontario history.  In 1974 she was appointed Provincial Secretary for Social Development, a position she held for more than nine years and one reflecting her deep passion for improving physical and mental health care, youth, senior and veteran services.

Breaking a near hundred-year tradition, she was the first woman member of the conservative Albany Club of Toronto.  She resigned as Secretariat minister in 1983 to take on the position as special assistant to the premier, in charge of the province-wide 1984 Ontario Bi-centennial celebrations.  Margaret retired from politics in 1985 and did not run again for elected office.

Margaret enjoyed downtime with granddaughters and husband in homes on Pelee Island and Scarborough.  Margaret's health began to decline following a March 2020 illness and, after 99 ½ wonderful, caring, loving years, passed peacefully at home in the early hours of October 29.

While the family wishes you could all be with them in their time of loss, they appreciate your kind words and condolences.

Please contact Margaret's daughter Jane Elliott via email at This email address is being protected from spambots. You need JavaScript enabled to view it. for visitation details.