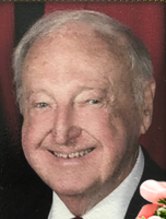 MASSEY, Ronald C. - Passed away peacefully at home in Toronto on November 19, 2020 in his 88th year, after a multi-year tussle with cancer.

Ronald is survived by his devoted wife of 60 years, Peggy; by his daughter Lynne, son David, daughter-in-law Marilyn and grandchildren Nicole and Connor; and by a wealth of nieces, nephews, cousins and their families.

He was predeceased by his parents, Esther (McCann) and Thomas E. Massey; and by older siblings Esther (Lown), Irene (Robb), Ruth (Slater) and Tom Massey.

Ron was born in Toronto and lived most of his life there. He began working at the head office of Imperial Oil in 1951 and literally worked his way up from the mailroom, eventually becoming head of risk and insurance. Along the way, he acquired a cottage, a wife, a home, two children, and a bachelor’s degree in commerce — in that order.

In 1983, he and Peggy moved to Bermuda, where Ron took up roles as Executive Vice President with Ancon Insurance (part of the Exxon organization) and later with Oil Insurance Limited. These roles brought interesting professional challenges plus stimulating opportunities to travel to Europe, Iceland, China, Thailand, and other destinations. Bermuda itself was the source of many new friendships, along with new interests like golf and yacht club lunches.

Before, during and after the Bermuda years, a pillar of Ron’s life was time spent at Stoney Lake, Ontario. It was there that he and Peggy met in the late 1950s, and once engaged they began planning their own cottage on the lake. Over the decades they spent many happy summers, weekends and holidays at Stoney with family and friends. In retirement, they were fortunate to divide their time between Stoney and Bermuda.

Ron considered himself a lucky man. He was grateful to Imperial Oil and the Exxon organization for the solid foundation and many opportunities they provided; he felt that marrying Peggy was the best decision he’d ever made; and he enjoyed warm family connections and decades-long friendships with people from all phases of his life.

A celebration of life will be arranged at a later date. In the meantime, friends may wish to remember Ron by hoisting a very dry gin martini or a Scotch on the rocks.

For those who are interested, donations to the Sunnybrook Foundation would help support the multiple teams and departments that provided outpatient care during Ron’s last few years.

Finally, the family extends sincere thanks to the nurses and PSWs of SE Health and to the entire caring, competent team at Eldercare Home Health, with whose assistance Ron was able to live out his days at home with Peggy at his side.