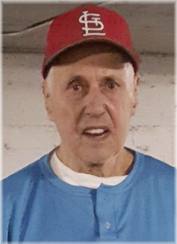 Passed peacefully with his family at his side on November 18, 2020 at Mackenzie Health Centre, Richmond Hill.

Predeceased by his parents Spero and Vana Thomas, his bother Jimmy Thomas and sister Eleanor Hunter. Stephen grew up in a time when men were men.

Teaching his nephew to catch a football, he told the lad of 9 years to "get up" and when the bullet hurts that he "has to learn to take it" and "don't drop the ball".

Stephen would often say, "Take a shot!" Stephen was a retired businessman whose passions included playing baseball, golf and discussing sports, economics and politics with his freinds.

Stephen would call it as he saw it!

Stephen played softball for over 30 years and only recently called it a season when he was 82 years old.

When friends at the gym and baseball teams he played on learned he was in hospital, grown men wept.

As an expression of sympathy donation to Sunnybrook Health Sciences, Mackanzie Health Centre or Children's Wish Foundation. He will be forever missed and in our hearts.