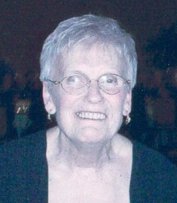 Respecting the current situation and pandemic restrictions, the funeral service will be private. Arrangements are with Ward funeral home, BRAMPTON Chapel. The Family has also provided the opportunity to view the funeral service from the comfort of your home through a livestream link on the funeral home's website. Click Ms. Nicholl's memorial page, and find the livestream link in the "Photos and Videos" section. This link will become available on Wednesday November 25, 2020 at 1:00 p.m.

In 2012, Janet was awarded by the City of Brampton the 25 Citizen Award. The following was read before receiving the award.

Janet Nicholls has had a broad track record of fund-raising and volunteer work starting at the age of 10 years, where she first became an active volunteer with the YMCA’s Craft Camp Counselor for the Unprivileged Children of London, Ontario, in the same city where she was born and raised in the late 20’s. Early on, Janet was exposed to parents who were extremely involved with volunteer work on a hands-on basis in their community during the Depression. At an early age, she personally witnessed many of her family, friends, relatives and the common folk at large who had lost everything including hope and dignity. Her father quickly became her mentor during this highly impactful period of her life as she often observed both of her parents, first on scene, aggressively helping others at times of dire need. When Janet finally married, it was not surprising that both she and her husband would carry the family torch in continuing the family tradition of volunteer work. Janet’s life led her to Halifax, Nova Scotia where she worked with seniors and Youth, raising funds at the Brunswick Street Mission through the Church, which became the basis for her passion and desire to serve. Her high level of energy seemed endless; her goals to make the world a better place, relentless. When she finally moved back to settle in Brampton, Ontario, Janet obtained a B.A. Degree majoring in Sociology, and English from Wilfred Laurier University and a M.Sc. Degree in Education (Art) from the University College at Buffalo, while continuing her fund-raising and volunteer work. Apart from her formal day-to-day responsibilities as a teacher, Janet became involved at a very different level when she was often called upon to talk teenagers down from a “high”, just about the time that the drug scene started to emerge in North America. Her volunteer work with the CNIB was also a credit to her community involvement in her role as Vice-Chair of the Halton Peel C.N.I.B. Advisory Board. Janet became a Chairperson for the Building Committee for the major rehabilitation of St. Paul’s United Church in Brampton, which involved a million dollar fund-raising project. Janet was honored with the Golden Hammer Award for Recognition & Profound Appreciation five years in a row (1981-1986). In 2003 she was honored for her service in the community as Brampton’s Citizen of the Year by the City of Brampton. Janet is currently Chairman and Group Leader for various United Church Women’s Groups and Official Board Committees. If that isn’t enough, she is currently an active member of the Order of the Eastern Star #189. Included in Janet’s lifestyle, you will also find her providing space in her home for Vietnam Refugees. She even taught Vietnam and Chinese Refugees English as a second language as a volunteer at St. Paul’s United Church until the Peel County Board of Education finally provided registered classes. Janet Nicholls was the Founder for Habitat for Humanity Brampton (HFHB) which started at the kitchen table in her own home. Due to her dogged determination, the organization finally received its international charter in early 2000. For the last four years, Janet has served as Chairperson of the executive board and has been a key fund-raiser over many years. Through her efforts and direction, HFHB completed their first build which was officially dedicated July 2004 by local officials and dignitaries including Brampton Mayor Susan Fennel. With Janet at the helm, HFHB now has an aggressive goal going forward of a 36inTEN campaign; the plan is to build 36 homes in the next 10 years. We have no doubts that we will reach that goal. All thanks to Janet, her legacy has touched us, and we will continue to build for the years coming. According to Janet, volunteering is a passion from the heart. She says that it is important to walk in the shoes of people in need and to see the greater value of giving than receiving. It’s hard for Janet not to think about volunteering and fund-raising for a cause. And it’s hard for us not to think about people like Janet. On a personal level, Janet still has the time to enjoy her quiet moments. She is an avid weaver and painter. She loves gardening, hiking and canoeing in the great outdoors. She sings the Church Choir and Brampton Festival singers; she is currently the oldest and longest term member.