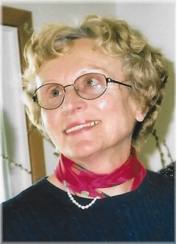 The family is saddened to announce that on November 20, 2020 at Humber River Hospital in Toronto, Alexandra ("Lesia") Bulchak (née Hoshowsky) peacefully fell asleep in the Lord following a brief illness.

She was predeceased by her loving husband, Bohdan, in 2013.

Alexandra was born on October 30, 1933 in Berezhany, Ternopil Oblast, Ukraine into a family of educators.

At Christmas time 1941, following its occupation by Soviet forces, she was forced to flee her homeland as a young girl with her mother, Maria (née Moroz, deceased 1996, Toronto) to escape deportation to Siberia.

Her father, Pylyp, a school principal, political activist, and WWI Ukrainian Galician Army veteran, remained, only to be arrested and later executed by the Soviets.

Making it to safety in what was then German-occupied Czechoslovakia (where her mother's family was from), Alexandra attended public school in the town of eská Lípa, in the northern Sudetes Mountains region, and later went on to high school in Karlovy Vary.

After WWII, she studied choral art and conducting at the Academy of Fine Arts in Prague.

It is Jaroslaw who first introduced Alexandra to her future husband, Bohdan Bulchak (co-owner of the original MC Dairy from 1959 until he retired and sold the business to Future Bakery).

Alexandra and her beloved Bohdan were married on February 26, 1976 at Holy Eucharist Ukrainian Catholic Church, Toronto.

In 2019, on behalf of herself and her late husband, Alexandra donated over 100 works from their collection to the Canadian Ukrainian Art Foundation.

Mourning Alexandra's loss are her cousin Marko Moroz and wife Linda, and their children Lidia and Tamara, her late cousin Andrew's wife, Olana, and their son, Alexander, her cousins Michal (Shannon) and Vladimir (Marta) Sav?enko (U.S.A.; originally from Slovakia); her late husband's niece, Roxanne (of La Pine, Oregon), Bohdan's nephew Richard Lah with wife Darlene and children Justin, Jacob, and Joelyne with husband Steven and their children Austin and Hayden (of Waterloo), niece Zirka Bulchak of California, grandniece Natalka Matiushenko of Toronto, Bohdan's god-daughter Ulana Plawuszczak Pidzamecky, her husband Taras and their children William, Sophia, and Alexander, also of Toronto, as well as family in Ukraine and friends in Canada.

The family would like to offer its heartfelt thanks to the staff of the Ukrainian Canadian Care Centre for their loving and professional care during Alexandra's last year of life, with special thanks to Dr. Szul for his attentive support.

Many thanks to Petro Kupnitsky for his years of friendship to both Bohdan and Lesia. A sincere thank-you to her companion, Rosemary, of Home Instead Senior Care, who brought joy and contentment to Alexandra during her final weeks. Heartfelt thanks, as well, to Newediuk Funeral Home Kipling Chapel for their services and understanding support.

Alexandra will be deeply missed by all who knew her! Memory Eternal!.