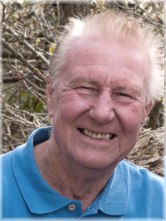 Don was born on August 22, 1939 in the house just north of the old Markham Missionary Church on Main Street Markham to Melvin & Lillian Barkey (nee Roach) and was the eldest of three children.

On Saturday November 21, 2020 Don passed into the arms of Jesus and went home.

His younger sister Diane Gee (predeceased) (Ron) and brother David (Joanne) were twins who were born three years after him.

Don was raised in a Christian home where he accepted Jesus as his Saviour when he was a young boy. His faith in Jesus was and integral part of who he was and much of his path in life sprung from his faith. He went to Franklin Street Public School and also Markham District High School. His early years growing up were spent on the family farm on Highway #7 to the east of Hwy #48 and he viewed those years as the best years of his childhood.

After high school Don owned a bookstore on Main street called: Don’s Christian Books with his mother Lillian for a number of years. He met Elva Kennedy shortly after high school through his sister Diane as they were best friends. Don & Elva fell in love and were married on September 7, 1963 and they just celebrated 57 years this past September

Don and Elva went on to have three children: Sherrie, Scott and Shelley raising them faithfully in the truth of God at Markham Missionary Church.

Don was a long-time member of Markham Missionary Church where he served faithfully in various capacities including head usher for a number of years and also as a lead role in many of the Christmas Cantata’s. Don also enjoyed a lifelong hobby of restoring classic cars. He worked closely with his son and grandsons teaching them the tricks of the trade of car repair and restoration. He also spent many years travelling to Hershey, and Carlisle PA to car shows bringing parts home for his various cars.

In recent years, illness separated them with Don remaining at his home on Peter Street and Elva in Unionvilla Nursing home with Don visiting her often until his health declined to a point where they kept in touch through weekly skype calls.

“Our citizenship is in heaven, and from it we await a Savior, the Lord Jesus Christ.”  Phil. 3:20.

In lieu of flowers donations may be made to www.ECMcamps.ca.