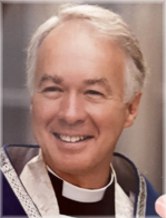 He was the deeply loved husband of Gail for 48 years, the devoted father of Robyn, and a very special Papa to his dear grandchildren, Andrew, Sarah, Grace, and Eden.

Logan graduated from Upper Canada College in 1952. In his final year he was a Steward and Head of Mowbray’s House. In 1951 he sailed to England with a cast from U.C.C. to perform in Thornton Wilder’s play “Our Town.”  He had many happy memories from this experience that he often shared with his friends!

He then received a B.A. from Trinity College, University of Toronto. While attending Trinity, Logan joined the Delta Upsilon Fraternity and he performed in several theatrical productions, including one directed by Robert Gill at the Hart House Theatre.

Following this, he studied theology at Wycliffe College, University of Toronto. Logan was elected Senior Student and earned an L.Th. degree. He then pursued graduate studies, earning a B.D. from General Synod.

Logan served as a Priest in several Parishes within the Diocese of Toronto for 43 years. During this time, he held many Diocesan positions. Logan was installed as a Canon of St. James’ Cathedral. He served as a member of the Board of Governors of the Bishop Strachan School for six years.

A private family service has been held. If you wish to view the service, please visit gracechurchonthehill.ca/lv which can be found on the Grace Church on-the-Hill website.

In lieu of flowers, the family would appreciate your support of either “Grace Church on-the-Hill,” or the “Canon Logan and Gail Varey Chapel Fund” at Huron University College, 1349 Western Road, London, Ontario N6G 1H3.

“and He will raise you up on

eagle’s wings, bear you on the

breath of dawn, make you to

in the palm of His hand.”