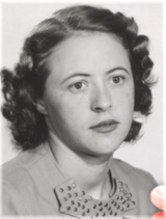 FRIDRIKSSON, Arngerdur Johanna - With deep sadness, we announce the loss of our beloved mother, grandmother, sister and friend, Arngerdur (Gigi) Fridriksson, who passed away peacefully in her sleep on Saturday, January 16, 2021.

Our special thanks to the dedicated staff at Meighen Manor Nursing Home for their loving care in her final days.

Predeceased by her husband Jon in 1981, and son Petur in 2011, she is survived by her son Stefan and wife Susan, daughter Alda and husband Robert, and her grandchildren Kristin and Jeffrey.

Gigi was born June 13, 1925 in a village near Patreksfjordur, Iceland and immigrated to Canada in 1949. She and Jon married in Winnipeg, moved to Montreal and later to Toronto. She was fiercely proud of her heritage and was involved for many years in the Icelandic Canadian Club. Gigi’s life was devoted to her family.

She will be greatly missed and her memory lives on in our hearts.

Donations can be made to the Alzheimer Society.