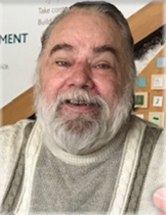 DALY, Bryan James - It is with profound sadness and extremely heavy hearts that we announce that Bryan (formerly from Willowdale) passed away suddenly on Friday, January 22, 2021 at the age of 58.

Though Bryan struggled with many challenges throughout his life, he was a very kind, sweet and gentle man.

He was inquisitive, a keen observer of life and saw the world in the clearest and most decent way. He was respectful, generous, thoughtful and helpful.

He often reflected on life at the family cottage and was most at peace when he was in touch with nature.

Bryan’s love for music included artists such as Gordon Lightfoot, Leonard Cohen, Don McLean, Bob Dylan and The Beatles. He took joy in other people’s successes. While his circumstances kept him away from family off and on over the years, he will never be forgotten.  Bryan was a man of integrity who did the best for those around him, particularly those less fortunate.

He is sadly missed by his 94-year old mother Ada, his sister Theresa (Art) and his brothers Joe (Elsa), John, Robert, Peter (Shari) and Tim.

The world is a harsher place without him and he will be in our hearts forever. We ask that you consider extending an act of benevolence into your community – a true and honest reflection of Bryan.

There will be a private service in the coming days.

In honour of his memory, donations may be made to The Archway Program at CAMH Downtown West Clinic, 100 Stokes Street, 5th Floor, Toronto M6J 1H4.