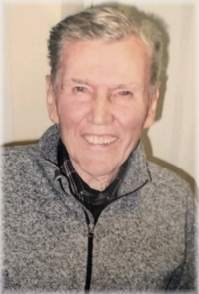 After WWII he had to escape to Austria, with his parents Johann Sr. and Eva.

He went to high school there and made friends he would reconnect with years later in reunions he greatly enjoyed Then they went to Germany, then in 1953 to Canada with only a few dollars in their pockets.

At first John worked some odd jobs in Canada, such as picking tobacco in Tillsonburg.

Then he went to Prescott where John found two things : a job as a quality inspector in an RCA factory, and his wife, Christa.

After getting married the two of them moved to Toronto where John worked as a TV repairman for Simpsons.

And soon he and Christa had a young family with the arrival of Linda and Harald.

John had many friends at the 1st Lutheran church, and the Blue Danube club, where he enjoyed many a good meal with his family.

Later on he welcomed son-in-law Tom Gehring and then daughter-in-law Sonja Geissler to the family.

Then grandchildren Matthew, Sylvia, Annika, Katia and Axel soon followed, and he became a very proud Opa to all of them. He overcame health problems in his later years, and always had a "no nonsense" demeanour about him and never had to try too hard to be optimistic.

John took great pride in providing for his family. John was a modest man who saw his ambitions come true with hard work and taking risks. He had a strong love of faith and family, and his family felt his love very much.

A private funeral at Pine Hills Cemetery has taken place.

If you would like to honour John's memory you can donate to the Lakeridge or Scarborough Health foundations.