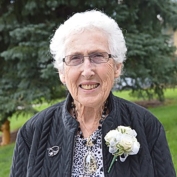 SOICHER, Sylvia (née Budovitch) - It is with great sadness that we announce the passing of our beloved mother, Sylvia Soicher on Thursday, April 8, 2021, in Toronto, Ontario.

Born in Fredericton, New Brunswick on September 26, 1927, she was the daughter of the late Jake and the late Minnie (Hoffman) Budovitch.

Devoted wife of the late Jack Soicher. Sylvia will be dearly missed by her sons and daughters-in-law, Harvey and the late Mary Ann, Mel and Marisa, Bernie and Nanci, Avrum and Judy; her grandchildren, Daniel, Jacqueline, Phillip, Paige, Michelle, Gabriel, Hannah, Lucie and Maya; her sister, Miriam (the late Harry Crystal), sister-in-law, Sybil Budd, and many nieces and nephews.

Predeceased by her brothers and sister-in-law, Frank and Daisy Budovitch, and Bernard Budovitch.

Sylvia left Fredericton to study Physiotherapy at the University of Toronto and graduated in 1947. Following graduation, she moved to Montreal where she practiced physiotherapy for 45 years. She met her husband Jack on a ski weekend in the Laurentians and together they raised their family of four boys.

The family would like to express their gratitude to the staff of Apotex Centre for their care over the last few years. Special thanks to Sylvia’s caregiver and friend, Elvie Martin.

In lieu of flowers, donations in her memory may be made to the University of Toronto at https://boundless.utoronto.ca/give/, or to the charity of your choice. Arrangements entrusted to Paperman & Sons.