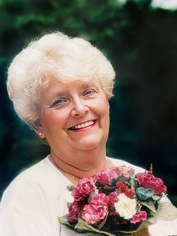 JACOBS, Sylvia Elizabeth Anne - It is with immense sadness that we announce the peaceful passing of our beloved Mom, Nana, Great-Nana and Sister on April 10, 2021, in her 90th year.

Born to the late Tom and Betty Wisman in Toronto, Ontario. Sylvia was the eldest of four children. Ray (2019) (Gayle), Diana (Eric) and Ron (Gail).

Sylvia has rejoined her sweetheart, Jerry (1986); with whom she shared seven children.

Sports played a foundational role in Sylvia’s life story. In her early twenties, she and best friend Pat attended the local golf course deciding to follow that “good looking guy.” Perseverance on the links led to a successful marriage and full family life with Jerry away from the 19th hole. In the off-season, golf clubs were traded for hockey sticks when six of their seven children played house league and select hockey in Thornhill.

Travelling to games in Barrie and Orillia was not possible as it would take away from family time so she thought, “Why can’t we play in Toronto?” This idea along with her determination led to the formation of the Thornhill Islanders Hockey Club in 1980, now known as the Markham Islanders. She would go on to become one of the first women to hold the distinction of GM of a minor hockey club.

Sylvia was always one to make certain all children could participate and benefit from sport. Determined to make sure her middle son who is deaf, autistic and has cerebral palsy could join his siblings, Sylvia founded “Skate Together” in 1983. Local merchants would donate food and everyone would have lunch together afterwards. Bringing people together and building community was what Sylvia was all about.

Now, as a widow raising seven children, she decided to take her mission one step further bringing Sledge Hockey to Ontario in 1986, when she formed the Ontario Sledge Hockey Association for the disabled. Sylvia always believed that sport should be accessible to all who wanted to play. She believed that inclusivity mattered and disabilities were not an excuse to be sidelined but rather a special gift to be championed.

Among many of Sylvia’s accomplishments are: Certificate of Merit - from Prime Minister of Canada | George Chamandy Memorial Trophy - the highest award presented to any individual in the GTHL | Commemorative Medal for the 125th Anniversary of the Confederation of Canada-from the Governor General of Canada | Ontario Medal for Good Citizenship - from the Premier and Lieutenant Governor of Ontario | Special Education Advisory Committee - York Region Roman Catholic Separate School Board | Exceptional Contributions to Minor Sports in Thornhill - Thornhill Community Hockey League | Integration Action Group - Board Director

In her later years, Sylvia loved travelling by car near and far to destinations as far south as Florida, west to British Columbia and East to New Brunswick. There were no boundaries too far for Sylvia’s heavy foot!

Nana’s happiest times were spent with her family and friends; trips to Disney, Mexican Fiestas with Mariachi bands, family celebrations, stage performances, concerts with the one and only Helmut Lotti and of course Christmas at the Jacobs' house. Sylvia created numerous memories for so many that will be remembered for a lifetime. Nana’s grandchildren will forever cherish her playfulness, profound love of music and the bright colours of her backyard.

A proud matriarch, Sylvia’s front door was as open as her heart. There was always a welcome seat at her table. She was an inspiration and a true trailblazer touching so many lives. Her determination, contagious smile and laughter will fill our hearts forever.

As Sylvia May Say; “If you know deep in your heart what’s right, then do the right thing, and fight for the betterment of people in society.”

Memorial Donations may be made to the Alzheimer Society or to the Heart and Stroke Foundation.