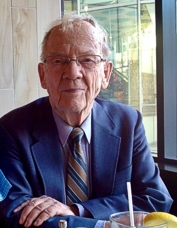 BODIE, Lloyd Leslie - Peacefully, in the comfort of his home at Sunnybrook Veterans Centre, Lloyd passed on from this earth on April 24th, 2021, in his 95th year.

Lloyd and his twin Allan were born in the depths of a Winnipeg winter in 1926. He spent his childhood summers swimming in the Red River with siblings and friends. He often spoke fondly of his father, who took them on adventures into the wilds of Manitoba to explore nature.

Winnipeg was his home until he joined the Army in 1944, when he moved to the Canadian Forces Base in Shilo, Manitoba for training, and there became an instructor in marksmanship. Following the end of the war, Lloyd attended the University of Manitoba, receiving his Bachelor’s Degree in Mechanical Engineering. One of his summer jobs took him to Bissett, Manitoba, where he met his future wife, Janice.

One of Lloyd’s early jobs was in Montreal, where he was able to spend time with his dear Uncle Roland who lived and worked there also. Later, Lloyd moved to Peterborough, Ontario, to work with Canadian General Electric. This job provided him with the opportunity to travel across Canada by train, as he was the on-board engineer taking care of the engines. During this time, his son Allan was born. When GE ceased making diesel electric locomotives in Peterborough, Lloyd moved to Toronto to work for Ontario Hydro. Here he worked in a number of positions, a favourite being the community spokesperson on the topic of nuclear power.

After a long, satisfying career, Lloyd retired from engineering in 1991.

Lloyd had several places he loved to visit and spend time with family and friends. Lloyd, his brother Allan, and their Mother would meet annually in Banff for a holiday. For many years he made an annual trip to Brandon and Clear Lake, Manitoba, to visit with family and revel at the wonder of the wide prairie sky.

At the age of 40, he took up skiing, which he enjoyed in Vail, Colorado. In 1971, he received the Golden Book - a treasured recognition for completing every run in Kitzbüehel, Austria, of which he was very proud. He did his last ski run at age 80. Skiing in the American Rockies led to hiking in Utah as he advanced in years. He was frequently accompanied on these skiing and hiking adventures by his lifelong friend and companion, Louise Trudel. His legacy of these travels is a marvellous collection of photographs taken with his beloved Hasselblad, and an interesting accumulation of rocks. A CANDU sales trip to Romania provided Lloyd the opportunity to visit Italy, and view some of Michelangelo’s great works, which he admired for the rest of his life.

He enjoyed travelling throughout southern Ontario in at least three MGB sportcars, loving the winding roads requiring lots of gear shifting. Lloyd had a deep appreciation of classical music and opera, with Wagner being his most favorite. He was a lifelong reader, and his curiosity led him to study a wide variety of topics including Eastern philosophies, yoga, religions, and quantum physics.

Lloyd was the last surviving member of his generation in his family. He was predeceased by his parents George and Ella (Frye), sister Margaret Mann, his beloved son Allan, brothers Allan and Roland, and sister-in-law Joan. He was also predeceased by dear friends Hubert Trudel and Louise Trudel.

He is survived by brother-in-law Jim Mann Sr., niece Cindy Waldie, nephew Jim Mann and their families, as well as the children of brother Roland. Lisa Trudel, a special person in his life, also survives him.

Cremation has taken place. Lloyd’s ashes will be interred in the Bodie family plot in Carman, Manitoba at a later date.

Since moving there in 2014, Lloyd always referred to Sunnybrook Veterans Centre in Toronto as "My home." He was superbly supported by the wonderful, caring staff who made his final years enriched and happy, for which his family and friends are most thankful.