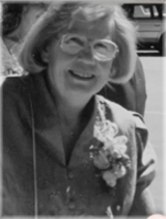 Beloved wife of Thomas Milburn for over 65 years.

Allison grew up on a small farm near Hagersville, Ontario in the 1930’s, with her older sister Madeline.

Allison moved to Toronto after university where she was a dietitian at Annesley Hall, a women’s residence at the University of Toronto’s Victoria College. It was in Toronto that she met her husband Tom, brother of Mary Beaton, one of her classmates.

In addition to her devotion to her family, she was a long time member of the Donway Covenant United Church and the Ladies Fellowship Group, the University Women’s Club’s Antiques Group, the Ontario and Toronto Home Economics Associations and curled at the Avonlea Curling Club.

Allison’s family would like to thank Yvonne Jones and the team at the Greenview Residence – Second Floor for all of the wonderful care she received there since 2012, and Dr. Grossman, Dr. Berlin and the staff on 5SE at North York General Hospital for their care and compassion in the days before her death.

A graveside service has been scheduled (COVID restrictions permitting) for Saturday, September 18th at 1:30 p.m. in Mount Pleasant Cemetery.

In lieu of flowers, memorial donations can be made to North York General Hospital.