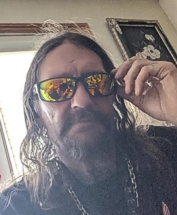 He now joins his two sisters Carol and Judy, his brother Rick, and his father Andy in heaven as well as many on the Potter side that have left before him.

He was born in Toronto, Ontario June 14, 1965. He was raised and loved by Andy and May Jenkins. He graduated from Danforth Tech, 1+ years community college. Worked for the City of Toronto for 14 years.

He was a frontman for many bands for 40+ years, including “Prophecy," “Metallion," “The Wake," “Hand Over Fist," “Dirt," among many others. He toured Canada with “The Wake” on an Amnesty International cross-country tour.

Funeral arrangements will be held on Tues., June 22nd  1:00pm - 4:00pm at Giffen-Mack Funeral home, 2570 Danforth Ave., Toronto, Ontario. Due to Covid restrictions, capacity is limited. Those who wish may join virtually via the Livestream link on the funeral home's website.