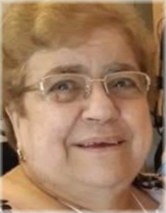 FARIAS, Joaninha - With broken hearts we announce the passing of Joaninha.

She lost her battle to cancer in the early hours of the morning of July 23, 2021.

She is survived by her children Maria, Fatima (Neil), Manue (Sherri) and Sandy(Sergio).

Great friend to many. She had a love for prayer, song and dance.

She will be dearly missed by all who knew her.

A graveside service will take place in Brampton on July 26th.