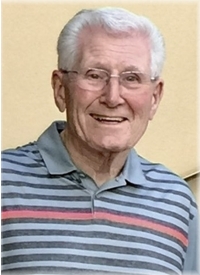 Gordon James Douglas, beloved husband, dad, father, grandpa, and papa, passed away at the age of 92.

Gord is survived by his wife and best friend of 70-plus years, Estelle; daughter, Lori and husband Terry; son Paul and wife Cathy; and daughter Joanne and husband Bud.

He was also a devoted grandpa to grandsons, Andrew (Carly), Tyler (Stacey), and Landon (Paige) and granddaughters Dalyce (Bruno), Daena and Alyson (Michael).

Also missing him will be great-grandchildren, Cole, Lucas and Ashlyn. Gord was an electrician and worked for many years at Comstock Electric.

He then moved into Purchasing at Bulldog Electric.

Later, he moved on to Garland Commercial Ranges where he was in Sales.

It was at Garland that he became part of a team that designed a vent for commercial use that soon became patented.

There were not many restaurants the family could enjoy without Gord asking to see the kitchen and educate them on the venting system he was so proud of.

After retirement from Garland Ventmaster, Gord and Estelle sold their family home and moved to Alliston, where they lived together for another 30 years before Gord's passing.

They enjoyed the company of new friends at Greenbriar and also spent many days of leisure at their cottage at Steenburg Lake, where family would continue to visit. In his last years, Gord was part of the Kingsmere Retirement community.

He was well-loved and his spirit will live on in generations to follow.

There will be a private service and a Celebration of Life will be held at a later date.

"The Lord turn His face toward you and give you Peace".