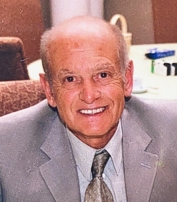 BIONDI, Giampaolo 'Paul' - Following a heartfelt and meaningful evening with his grandchildren, children and wife; sharing his wisdom and signature wit, Giampaolo (Paul) Biondi passed away July 24, 2021 in his 91st year.

He leaves behind heavy hearts; yet, smiling faces.

Giampaolo’s family would like to extend their deepest thanks to his PSWs who showed him so much care and love. They who helped him in his final days, along with the many people’s lives he touched throughout his years, admired him for his positivity and kindness.