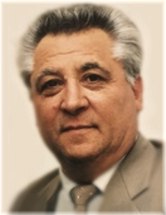 BAFUNDI, Giovanni Nicola - It is with our profound sadness to announce the passing of our beloved Giovanni on Sunday, August 1, 2021 at Sunnybrook Hospital.

Giovanni will be forever cherished by his beautiful wife Gina.

He will forever be in the hearts of his children Vincenza (Mario Mercuri) and Maria Cristina (Paolo Sala).

He was a proud and loving grandfather to Veronica and Arianna.

He will be missed dearly by his Sister-In-Laws Carmela and Lina.