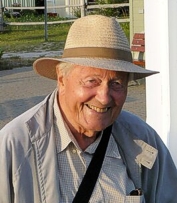 Eric was born in Magdeburg, Germany, just before the end of World War I.

Predeceased by his parents Otto and Luzie, and his older sister Gerda. Eric will be missed by his wife of 60 years, Sheila, his children, Ian and Madeleine, his son-in-law, Oliver and his niece Doris and nephew Peter (Karin).

Eric was a kind and gentle man with a great sense of humour. He was adventurous throughout his life and was loved dearly by family and friends.

Eric came to Canada in 1952 and shortly thereafter he began working for the department store chain, Simpsons. He started as a driver and worked his way up to Manager of their largest distribution centre in Canada. He worked for Simpsons/HBC for 31 years and retired in 1983.

Eric married Sheila (nee Dineen) in 1960 and had two children, Ian and Madeleine. Always passionate about learning , Eric became a part time student at York University at the age of 60 and received his BA in History at the age of 75.

Eric was known for his love of nature, wine making, baking, gardening, genealogy and most of all board games with the family that would often end up in fits of laughter. His favourite place in Canada was Sauble Beach which he visited every year with Sheila and the family from the 1950’s right up to his 99th birthday. Eric and Sheila also loved to travel. They travelled across North America in their VW Camper and explored many countries in Europe.

At 97, Eric and Sheila moved into The Grenadier retirement home on Bloor street where they were well taken care of by the staff and VHA caregivers, along with their family. They moved out of the Grenadier at the beginning of the pandemic to live in their daughter and son-in-law’s home. Eric enjoyed summer days in their garden, bird watching and afternoon coffee and cake.

We will miss you Dad but we have many great memories and photo albums to cherish. Rest peacefully, Prost Eric!

In lieu of flowers, donations can be directed to the National Wildlife Centre.