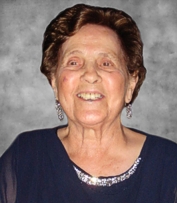 Clotilde was born in Cosenza, Italy. She ventured to Halifax, Canada in April of 1954 on a luxury liner named the SS Saturnia. She settled in Toronto where one month later, in May, she met the love of her life, her belated husband Fiorindo Perugini. On November 20th, 1954, they got married.

With $100 in Fiorindo’s pocket and a borrowed pickup truck, they set off to Niagara Falls for their honeymoon. On August 28th, 1955, their first born child Donato was born, and sadly died that same day. Being a newcomer to Canada, Clotilde faced many hardships, but was resilient and determined to move forward and persevere. In July of 1956, Brigide was born. 18 months later, Maria was born. 3 years passed, and Julie was born, and finally, 18 months after that, Tony was born.

Clotilde was the family matriarch who was always looking out for her loved ones and making sure their needs were put first. She was the third of five children, and the last one to meet her siblings (Giuseppe, Francesca, Dante, and Guido) in heaven. She was a mother to Brigide (Domenic), Maria, Julie (Roy), and Tony (Lisa). She was a grandmother to 8 grandchildren, Tanya (Danny), Justin (Anna Maria), Anthony (Fabrizia), Vincent (Alexandra), Matthew (Anna), Sophia (MItchell), Patrick (Tania) and Gabrielle. She was a great grandmother to 6 great grandchildren (Olivia, Ava, Arianna, James, Benjamin and Alessia), a cousin, an aunt, a sister in law, and a friend to many. To those who she met, she left a great impression of kindness, compassion and love.

In 1965, Clotilde and Fiorindo made the move to the suburbs and lived at 19 Cobb to raise their young family. During those years, the house was always filled with love, laughter, music, food, family and friends.

Sadly, Fiorindo passed away at the age of 65. Clotilde continued to live at 19 Cobb until she was 81 years old. She then moved in with Tony’s family for 12 years.

In September of 2015, she broke her femur, which led her to live at Villa Colombo Toronto for her final 6 years. In those 6 years, she continued listening to music, praying, enjoying good company with her new friends, while still being able to experience family traditions.

Clotilde lived an outstanding 97 (almost 98) years of life. She will forever be in our hearts, always loved, and will continue to watch over and protect us. May she rest in peace.