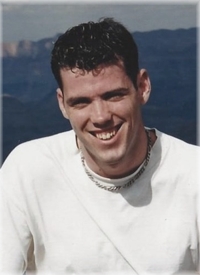 He left this world suddenly on Tuesday, August 24, 2021 at his Niagara Falls, NY residence at the young age of 43.

Brian was raised in Burlington, Ontario where he graduated from Nelson High School, and earned his Bachelor's Degree from Ryerson University in Toronto.

He then returned back to Toronto and was employed at the Royal York Hotel, finishing his career in banking at Northwest Bank in Niagara Falls, NY, where he lived a quiet life with his husband, Jeffery Anaclerio.

Brian is survived by his parents Jerry and Patricia (Gray) Dunn, spouse, Jeff Anaclerio; his sister, Stacey (Terry) Ingram, and is the uncle of Ava, Wyatt and Isabelle Ingram.

He is also survived by many aunts, uncles, cousins and friends.

For those who wish, memorial donations made to the SPCA Hamilton/Burlington or to the charity of your choice would be appreciated.