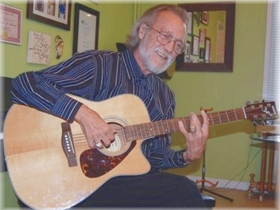 EDWARDS, Bobby Robert David Edwards  -  Known by most as Bobby Edwards, died peacefully at Southlake Hospital in Newmarket on September 15, 2021, at the age of 72.

A masterful guitarist, Bobby was a legend in the Canadian music scene.

He began his career at 15, and became one of Canada's most recorded studio guitarists.

In the 1970s and 80s he was the go-to guitarist for the CBC, and provided instrumentals for the beloved character "Rusty" on the Friendly Giant.

Bobby was asked to perform twice for Queen Elizabeth II, acted as musical director for the Juno Awards, and performed with the Toronto Symphony and in stage shows including Patsy Cline and Al Jolson.

He shared his love of music with his wife of 26 years, Maggie. Together they ran music schools in Toronto and Bolton, becoming the second part of Bobby's legacy: passing on his music to his students. Bobby was loving, generous, and funny.

He made connections everywhere he went. He was proud of his children and his step-children, and he made sure everyone knew it.

He delighted in sharing stories, music, and meals, and he was a great cook. When he wasn't making music or spaghetti, you could often find him sitting in his garden with his dog, Chloe, or being entertained by his beloved parrot, Pookie. His tenacity and resiliency in the face of his declining health over the last number of years was remarkable. His family thanks his community for their support, and the staff at Newmarket Health Centre for caring for him so well over the past several months.

Bobby is survived by his wife, Maggie, whom he adored; his children: Carey, Scott (Monique), and Holly (David); his step- children: Alexandra and Patrick (Kim); his brothers: Fred (Elaine), Walter, and Ron; and his grandchildren: Leah, Amber, Mya, Owen and Chloe. He will be missed.

Cremation has occurred and there will be a Celebration of Life held at a later date. Please visit website for Rod Abrams Funeral Home, Tottenham for updates as dates and times become available.

In lieu of flowers, the family welcomes donations to The Alliston & District Humane Society or Guitars for Kids – Toronto or the Heart & Stroke Foundation.

Dear Maggie, Why should I be out of mind because I am out of sight?  I am but waiting for you, for an interval, somewhere very near, just around the corner.  All is well. Nothing is hurt; nothing is lost.  One brief moment and all will be as it was before. - Love, Bobby.