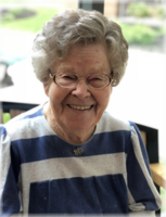 She was born in a tiny town of Heart’s Delight in Newfoundland on November 5, 1926.

She was a tough little baby weighing only two pounds and being so small she was placed in a wooden box near the wood burning stove for warmth.

When she was two years old her parents Llewellyn and Caroline Legge moved to Corner Brook Newfoundland where her father worked in the paper mill.

She was the oldest of seven children, Florence, Art, Lew, Don, Gus and Elva.

In 1941, her father went to Toronto to seek employment for a better job. Albertha was only 15 when she helped her mother pack up and sell their house. Albertha then navigated with her mother and siblings across Newfoundland, the ferry and from Nova Scotia to Toronto by train.

She went to church at the Salvation Army in Scarborough, bringing her whole family and then at the Peoples Church in 1972.

She started working for Peoples in 1976 and was well known as Mrs. J or the “Lady In Charge of the Kitchen”.

Before her passing, she was asked “if she will be sitting at the banquet table in Heaven or directing it?” She just beamed a big smile.

Visitation and the service will be held at Chapel Ridge Funeral Home, Markham on Monday, September 27th, 2021.