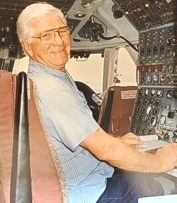 He was a decorated airman of the RCAF for 20 years and retired after 25 years with Air Canada.

Norm is an alumnus of De La Salle College in Toronto and was an avid airman, artist, hockey player, and Leafs fan.

He eloped with his sweetheart Marjory 75 years ago. He has three children: Janice (Cris), Bobby (Inky), and Brian, as well as two lovely grand-daughters Sara and Christina.

Cremation at Ward’s Funeral Home - (no service at this time).

The Careys appreciate your thoughts and prayers.