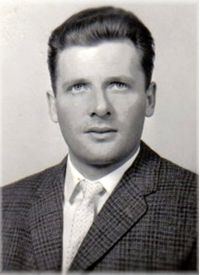 It is with great sadness that we announce the peaceful passing of Mario Barro on January 7, 2022 at the Margaret Bahen Hospice at the age of 86.

He will be fondly remembered by his loving wife of 63 years, Lucilla.

He will be deeply missed by his daughter Yvette (Ray), son Andrea (Lorraine) and by his grandchildren Matthew, Natasha, Andrea, Danielle and Leah.

Mario was born in Cordenons, Italy and was an avid cyclist before coming to Canada and moving to Toronto where he found work in construction as a house painter, eventually having his own company.

Lucilla followed shortly after. They were married in Toronto where they raised their two children. Mario was a kind and gentle soul who loved going to his cottage to fish and hunt with his friends and talk about their day over a glass of homemade wine.

He enjoyed playing Briscola with his grandchildren or just laughing along with them at special family dinners. Nonno will be deeply missed by all.

A private visitation and funeral service will be held for the immediate family, followed by a burial at St. John Cemetery in Newmarket.

In lieu of flowers, memorial donations may be made to Parkinson Canada.