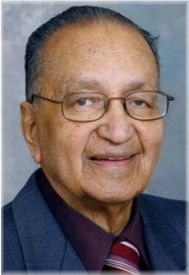 On Sunday, January 9, 2022, Denzil passed away peacefully, at home.

Denzil will be missed by his nieces, nephews, cousins, and friends in Toronto, India, UK, USA, and Australia.

Denzil worked with Future Executive in Toronto with Mr. Harish Mehta, and Macneill and Magor in India where he is fondly remembered by the Khaitan family, Bahadur Postwalla, the Archdiocese of Calcutta, Jesuit priests, the Carmelite and Loreto nuns, the Missionaries of Charity, and Rev. Dr. A. Joseph Lazar (India).

Our thanks to the Local Health Integration Network (James), Denzil's caring PSWs, the Music Program/Alzheimer Society of Toronto, and In Good Company.

Viewing will be held at the Bernardo Funeral Homes, 2960 Dufferin Street, Toronto, on Friday, January 14, 2022, between the hours of 1 p.m. and 8 p.m. The Funeral Mass will be held on Saturday, January 15, 2022, at Saint Thomas Aquinas Parish, 640 Glenholme Avenue, Toronto, at 10 a.m., followed by burial in Toronto. COVID restrictions will be in effect.