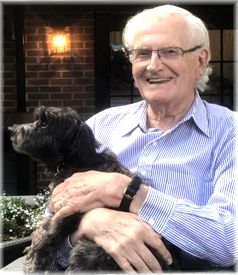 Michael is survived by his wife Elizabeth Helen, and their children Catherine (Paul), Carol (Fred), Doug (Kim), and Kevin (Stephanie).

He was predeceased by his sister Patricia.

Michael will be deeply missed by his cherished grandchildren Madeleine, Pearce, Helena, Grace, Ben, Claire and Charlie, and his canine sidekick Olive.

Michael grew up in West Toronto where playing hockey on High Park Pond became a passion.

That passion led him to be an avid lifelong supporter of the Toronto Maple Leafs.

Michael was also an avid sailor and longtime member of the Royal Canadian Yacht Club.

He graduated from Engineering at the University of Toronto in 1957 and completed his MA in 1958.

Michael worked briefly for the Ontario Research Foundation before embarking on a long career with Falconbridge Nickel Mines.

He would later take great pride in playing a key role in establishing the Nickel Institute where he served as president, building international awareness and membership for the organization where he was fondly known simply as M.O.P.

It was his love for his Engineering Profession that drove him to be a staunch supporter of Camp One and The Ritual of the Calling of an Engineer.

Due to COVID restrictions, a private service was held and we hope to have a celebration of his life in the near future.