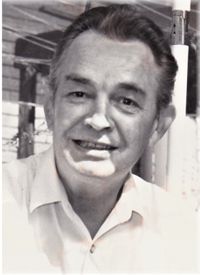 He was born in Guelph, Ontario on July 20, 1929 and lived most all of his life in Hamilton, Ontario.

He was husband to Rhoda Mitges and father of four children (Phillip, Cindy, Marika and David).

He spent most of his working life at Dofasco as a turn foreman, and made a huge contribution by helping match many good people to employment there.

He was a kind and gentle man, and loved to play chess, read, cook, garden, build and entertain.

Movies, crosswords and classical music were passions of his. He was a good son, husband, father, grandfather, uncle, friend, and provider.

Remaining to mourn his passing are his daughters Cindy (Steve) and Marika, son David (Micheal), and many grand children and great grandchildren, and many nieces and nephews and friends.

We each have our fond memories of our time with Bev, and are thankful for the positive difference he made in our lives and in the world. Our thanks to all those that helped Bev in his life.

Additional pictures of Bev can be found on the obituary page of his wife  Rhoda Mitges .

Family and friends knew of his passing, but posting of this obituary was intentionally delayed for safety reasons as his surviving wife was living alone.

We are thankful for you, and miss you Dad.