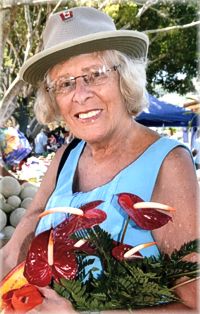 Ruth was born in Ottawa, Canada on June 19, 1929, the eldest of six children; Marlyn Grodde, Dorothea Trip, Eva Grodde (deceased), Ellen Klemm and Fred Grodde. Like many women of her generation, Ruth gained control of her own life only as she got older. At the age of 38, she became independent and finished raising her family on her own.  Ruth worked for many years as an accountant, office manager and real estate agent but her real passion was gliding which she enjoyed for over 30 years logging more than 1,000 flights.  Ruth was a pioneer in female gliding and in 1972, she set the Canadian female record for distance – 93 miles. For Ruth, gliding was not only a competitive sport, but the ultimate experience of freedom.

At the age of 63, Ruth’s love of travel and longing for new adventures led her to Atenas, Costa Rica. There she built a house on a hill that she called home for the rest of her life.  She made many dear friends in Costa Rica and cherished the frequent visits from her children and grandchildren.  During this time, when they were both 70, Ruth met her third husband, Don Munroe, with whom she spent the next five years until he sadly passed away at the age of 75. Ruth never missed an opportunity for gathering, celebrating and dancing, especially with her children and grandchildren who she referred to as her “great joy”.

One of Ruth’s favourite poems by Victor Hugo says a lot about how she lived her life; “Be like the bird who, pausing in her flight awhile on boughs too slight, feels them give way beneath her, and yet sings, knowing she hath wings”.  Ruth believed in living life to the fullest and often told her children that “things always work out in the end”.  Ruth ended her journey in the comfort of her own home in the presence of her loving daughter Charlotte Tarlo and her incredible caregiver and friend, Luis Miguel Campos Alfaro. Ruth’s eldest son, Michael Kindree, her grandson, Benny Grose, and her little sister, Eva, were waiting to greet her on the other side.

Ruth’s family will be hosting a celebration of Ruth’s life for friends and family over the coming months.  Details to follow.