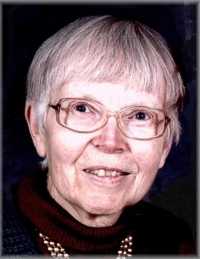 Predeceased by her parents Russell and Mary Bea (nee Bowman).

She is survived by her husband of 55 years, Donald Nelson and her brother Jack Bea and his wife, Betty.

Fondly remembered by her church family and many friends and neighbours. Margaret grew up in Hamilton, Ontario and graduated from the Macdonald Institute in Guelph, later becoming an Honorary Companion of the University of Guelph.

The United Church of Canada was always central to Margaret's life as she was trained as a Deaconess and served many years in the Toronto West Presbytery.

She also enjoyed a successful career of 27 years in the Accounting Department at Lawter International.

After retirement she enjoyed travelling with Don (Panama Canal and Britain to see where her favourite British shows were filmed) as well as many adventures with her senior friends' groups.

Margaret's love for animals and her generous spirit led to many years involved with their pets – Dog – Fu Fu and stray and shelter cats – Dusty, Lady and Pistach.

Music was also important to Margaret and she continued taking advance piano lessons until, at age 85, COVID restrictions set in.

Cremation has taken place. A gathering to celebrate Margaret's life will be held at Newediuk Funeral Home, 2058 Kipling Avenue, Toronto, on Saturday, May 21, 2022, from 1 p.m. until service time in the chapel at 2 p.m.

As expressions of sympathy, please consider a donation to Martin Grove United Church.