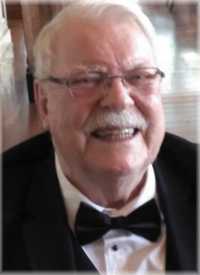 Passed getting ready for another day of adventures in Cincinnati, Ohio, but instead, his beloved Bette Marie, wife of 64 years, called him home!

Jim was a caring and loving uncle and great-uncle to many nephews and nieces around the world.

He will also be reuniting with his sister Patricia Gordon (Hele) and brother Geoffrey Gordon Ramsey.

After a lifelong career with Procter & Gamble, Jim, Bette and Lyndon settled in Cincinnati, Ohio, being located there in 1977 after working in England and Brussels, Belguim.

He will missed by many P&G colleagues as well as his Barbershop Chorus Family, where he became a legend in his own right! Jim was a kind and giving soul who enjoyed every day of his long life.

In lieu of flowers, donations to the Toronto Hospital for Sick Children, in memory of Jim, Bette and Baby Rosalind, would be greatly appreciated.