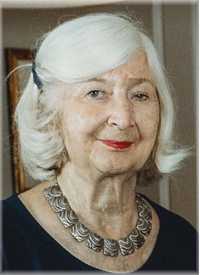 PATTERSON, Ilse Whilhelmine (nee BIALOWANS)    -   Ilse passed away on September 22, 2022, at the age of 84, from cancer, at peace with the world and with her family by her side.

She is survived by her husband, John; two sons, Jamie (Kate) and Andrew (Meadow); her granddaughter, Beatrice; her brother, Gerhard; and sister, Gerdi.

Ilse was born in East Prussia in 1938 but fled with her family to East Germany ahead of the Russian advance.

Her independence of thought and stubborn spirit were not compatible with the new communist government, so she fled to West Germany.

In 1958, she came to Canada with little more than the clothes on her back.

Ilse started work as a nanny and progressed through several jobs while attending night school.

At the time of her marriage in 1974, she was employed by Hiram Walker as secretary to the Ontario region sales manager. She paused her career after her two children were born, but later worked another 20 years with Scotiabank as a teller. After retiring, she volunteered at the YWCA International Boutique.

Ilse was a member of Bloor St. United Church for almost 50 years.

Visitation will take place at Turner & Porter Yorke Chapel from 2-4 and 7-9 p.m. on Monday, September 26th.  A Memorial Service in celebration of her life will be held there at 11 a.m. on Tuesday, September 27th.

In lieu of flowers, donations may be made to the Charity of Your Choice.