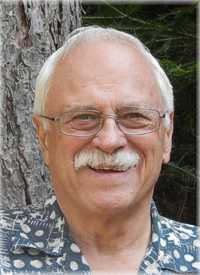 Ken was born on March 5, 1939 in Cabri Saskatchewan, and lived his adult life in Toronto.

Ken was predeceased by his parents and his children's mother Carole, and leaves his son Geoffrey, daughter-in-law Katie and grandchildren Robert (Bobby) and Theodore (Teddy), his daughter Carolyn (Minnie) husband Matt Renzetti and grandchildren Lara Khan, Jackson (JJ) Renzetti, Scarlett Renzetti, and Lorenzo Renzetti who were the center of his life.

Ken was educated at the University of Toronto where he obtained his BA followed by attendance at Berkley in California for his MA.

Subsequently he studied in London, UK where he obtained his Phd.

His doctorate dissertation was on the Victorian art critic Walter Peter.

His philanthropic endeavors were an important part of his life. He was a strong supporter of Doctors Without Borders and his own bursary program at York University.

He enjoyed cottage life, swimming in lakes and pools, and was very appreciative of a good meal whether at friends or at a Michelin starred restaurant.

His life was active and full.

Should friends desire a donation in Ken's honor may be made to York University Scholarship fund.