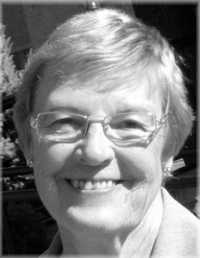 Outgoing, positive, independent, and always open to new people and new experiences - that was Ruth Cruden.

Ruth was born in Toronto, the only child of Clarence and Elizabeth (nee Ritchie) Ormsby.

She was a Parkdale CI cheerleader, Eaton's Fashion Council Rep, and a talented sock knitter for the war effort.

On a double date in the late forties she met the dashing Joe Cruden, her partner in love and community service for almost 60 years.

Together, they raised three daughters and turned their home at 89 Queen Anne Road into a hub of activity and hospitality.

Ruth prized her independence, working as a Constituency Assistant to federal MPs, Robert Winters and Alastair Gillespie; and later, in two long stints as a Judge in Citizenship Court, where she welcomed and encouraged new Canadians to join in building this wonderful country.

Ruth also lived a life of volunteerism in Scouting, the United Church, Kiwanis, and in the extended family of the Liberal Party.

A special thank you to the compassionate healthcare professionals who supported and cared for Ruth over the last two years, particularly the ones she danced with.

A celebration of Ruth's life will be held at Kingsway Lambton United Church on Tuesday, November 8th, at 1:30 p.m. It will also be livestreamed by the Church at kingswaylambton.ca .

In honour of Ruth, please consider donating to the Boys and Girls Club, Toronto Kiwanis (bgctk.org) to help improve the lives of inner-city kids.