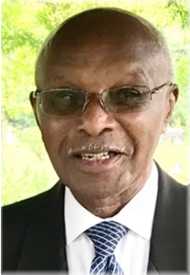 He was predeceased by his wife, Mildred; and siblings, Courtney, Ruby, Iris and Violet.

He is survived by brother, Vince (Monica); sisters Joyce and Jackie; sons, Darren (Maari) and David (Jacqui); grandchildren, Hayley, Maya, Nolan and Peyton; as well as numerous nieces and nephews.

Art was best known for his infectious smile and his warm greetings, frequently from his seat on his porch.

Even as his memory faded, his social skills remained and he continued to make you feel as if he knew you were important to him. He could best be described as a proud and meticulous man.

He was proud of his Glace Bay, Nova Scotia roots, his military service, his athleticism, his siblings and their families, and particularly proud of his sons and grandchildren.

He was meticulous about his clothes and how he looked, and perhaps a bit too concerned about the state of his lawn! In his last years, he was lucky to be cared for by Nellie, Amalyn, Pauline and Neliza, who treated him with dignity and respect.

Art will be missed by everyone who had the good fortune to know him.

In lieu of flowers, a donation to blackicesociety.com/product/donate-today/ (to help fund a program to introduce hockey to underprivileged, black Nova Scotians - mention "in memory of Art Lowe" in the order details), or to a Charity of Your Choice would be appreciated.