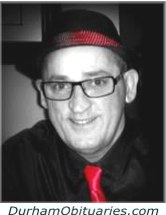 Michael is survived by his soul mate Judy, his adoring daughter Penny and her husband Michael, his loving son Kevin and his wife Robyn, and his two sweet grandsons, Matthew and Dylan.

Michael left this world much too soon but he will always be remembered as a loving and generous man who helped all those who needed it.

He was a person of strong character and values, anyone close to him knew this and loved him for it.

Mike's card and fishing buddies will miss his easy laughter and high spirits. His smile and warmth will be missed by everyone near and far, from his family in Nova Scotia to his friends in Cuba. He lived as he wanted, did all he dreamed, was never unhappy and regretted nothing.

Michael died a content man and he will live in our hearts forever.

Memorial donations to the Lakeridge Health - Cancer Care or Palliative Care would be appreciated.