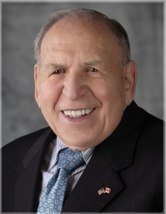 Albert Joseph Longo, beloved husband, father, grandfather and great-grandfather and a lifelong entrepreneur, passed away Thursday, November 2, 2017 in Toronto. He was 91.

He was preceded in death by his first wife Theresa (née McCahery); his son Paul; his parents, Emilio and Antoinetta; his siblings Eileen (and Peter) Scanga, Ben (and Lena) Longo, Victoria (and Vince) DeMarco, Emilia (and Carm) Rizzuto, Marguerite (and Louie) Darrigo and George (and Julia) Longo.

His spirit will live forever in the hearts of his loving wife Joan (née Roberts); his children and their spouses Maureen (Doug) Moore, Suzanne (Gus) Maurice and Peter Longo (Joseph Bell); and his step-children Joanne (Steve) Fone and Janet (Darryl) Thompson.

Faithful, hard-working and generous of his time and resources, he had incredible tenacity and strength of spirit. He kept a constant watch over his loved ones, guarding them with a careful eye. He taught his children through example the values of hard work, humility, and integrity. He approached every challenge with an open heart and mind and unlimited optimism. He was a loving husband and father who treasured his family and to whom he was an inspiration. He will be dearly missed. He attributed his success in life to his faith in God and family.

For his success in business, he deeply appreciated the ongoing contributions of his son Peter and son-in-law Joe. And he was forever grateful for the longstanding business relationships he shared with his friends Rudy Bratty, Emilio Gambin, Bert F. Grant, Larry Longo, Tom Sanci, Sylvio Borgatti, Stan Hinks, Tom Davies and Steve Jones. A natural-born entrepreneur, he started his first business with the help of his father Emilio when he was just 20 years old. From there, he went on to build apartments, homes, offices, schools, libraries, churches, factories, and nursing facilities in Canada and the United States.

Al first dabbled in senior services when he and his sister Emilia, a geriatrics nurse, acquired a nursing home in 1964 in Markham, Ontario. From there, they and a group of investors went on to build a chain of nursing facilities in Ontario. In 1978, he expanded into the United States, starting a company that came to be known as Cantex Continuing Care Network, and which he considered his most important business accomplishment. Today, Cantex owns and operates a network of post-acute services that spans the State of Texas and provides a full range of high quality in-patient, at-home and out-patient services. Al was the author of Living With Dignity: A Memoir, the title of which pays homage to Cantex's motto: "Living with Dignity, Aging with Understanding, Caring with Pride".

Donations may be made to Trillium Health Partners at http://trilliumhealthpartners.ca/donate.