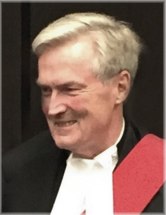 He spent his final days in comfort at home in Toronto surrounded by his loving family.

Smith and Shannon Fuhr, Charles and Brenda Smith, Geri and Dr. Ted Kubicki, Roberta and Phil Lori, Michael A. Smith, Daniel Smith, many cousins, nieces, nephews, friends and esteemed colleagues, all of whom he treasured.

Paul was born in Ottawa on January 22, 1947 to Dr. John F. French and Frances M. French (née Maloney) of Eganville, ON, with much of his youth spent between Ottawa and his beloved Lake Clear in the Ottawa Valley.

Paul was honoured to preside alongside his learned colleagues, and greatly appreciated and respected the crown counsel, staff and his many friends at Metro West. Paul served the public with great distinction. He has been recognized by colleagues, friends, crown counsel and defence counsel alike as a gentleman of character and integrity, generous of spirit, learned in the law, who carried out his judicial duties with patience, impartiality and compassion. He had a particular concern for marginalized youth and those living with mental illness.

The family will receive friends at the Humphrey Funeral Home, 1403 Bayview Ave., from 5:00 till 8:00 p.m. on Thursday, November 9th. A Funeral Mass will be held in BLESSED SACRAMENT CHURCH, 24 Cheritan Ave., at Yonge St. near Lawrence Ave., on Friday, November 10th at 2:00 p.m., followed by a reception.

In lieu of flowers, please consider a charitable donation to "Maryvale-Stigma Enigma".