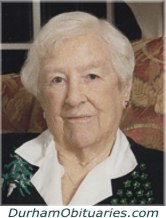 After a long life, Effie Amelia Kimmerly (née Brown) died peacefully after a short illness at Lakeridge Health Oshawa on Tuesday, November 28, surrounded by her children.

Born in Toronto in 1921, Effie, daughter to Archibald Smellie and Minnie Estelle Brown, was the eldest of six children.

As a child, she enjoyed the unique experience of travelling overseas during the Depression with her father to Scotland three times.

Growing up in Montreal, she first developed her lifelong love of music first by singing in church choirs, then as a member of Montreal’s Gilbert and Sullivan operatic society.

Effie graduated from Montreal General Hospital Nursing School in 1943, and then entered the Royal Canadian Army Medical Corps as a nursing sister in 1944.

She spent her years in Army service at a military hospital in Montreal, looking after service members returning from overseas during their rehabilitation.

Effie and Ralph John Kimmerly (deceased January 8, 2014) were married on May 11, 1946 in Montreal, and moved to Oshawa in 1951 to establish his medical practice there.

In Oshawa, she was an active member of Northminster United Church, including 32 years as part of their choir. Later she spent 14 years as a member of the choir at St. John’s United Church in Tweed, Ontario.

Over her 96 years, the times Effie enjoyed most was when she was surrounded by family including her six children, fifteen grandchildren and fifteen great-grandchildren. She took an active interest in each of their lives, and was a tremendous source of support and encouragement, never once forgetting to send a birthday card on time.

Effie was also a talented knitter, avid reader, and a tremendous fan of all Canadian sports teams, right up until this past Sunday’s Grey Cup game. A fan of the Toronto Argos, Maple Leafs and Blue Jays, she also enjoyed taking in all of her children and grandchildren’s football and rugby games.

Special thanks to Doctor Andrew Steele for his many years of excellent care, and to Drs. Gaschler and Graham and the nurses on floor 7-C at Lakeridge Health for their compassionate end of life care.

Funeral services will be held at 11:00 am Tuesday, December 5th, at Northminster United Church at 676 Simcoe St. N., Oshawa, Ontario, to be followed by interment in Union Cemetery, and then a reception in the church hall.

If desired, memorial donations can be made to The Kidney Foundation of Canada, March of Dimes or Diabetes Canada.