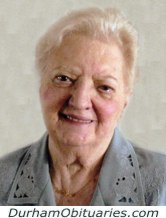 After a valiant struggle with many health issues for many years, Mom was released from this life to be with Heavenly Father and other family members.

She will be fondly remembered by many friends and family members.

A Funeral Service will be held at THE CHURCH OF JESUS CHRIST OF LATTER DAY SAINTS (632 Thornton Road North, Oshawa) on Friday, December 8th at 1:00 p.m. Interment Union Cemetery.