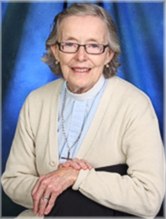 Rev. Arnott was born in Ontario, daughter of the late John and Josephine Maguire.

Besides her parents, Jane was predeceased by her husband, Murry Arnott, Sister Louise and brothers, John, Arthur, David and Harry.

Jane was a graduate of Trinity College, and Ordained in 1992.

She is resting at the Scott Funeral Home, 815 Main Street, Woodstock, NB, with a private visiting at the funeral Home.

If desired, donations may be made to St. Luke's Anglican Church Woodstock, NB or the Anglican Diocese of Fredericton.