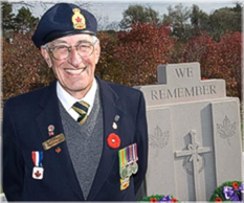 Jack passed away peacefully in his 92nd year after a long and healthy life.

Jack was born in London, Ontario, where he met and married his wife of 62 years, Myrtle (Carruthers).

Jack will be lovingly remembered by his four children, Dianna (Merv Henwood), Brenda (Doug Fry), Dennis (Ruth Conroy) and Jack (Rosemary Armstrong), his eight grandchildren, three great-grandchildren, one great-great-grandchild and countless friends and other family who were blessed to know him.

He was predeceased by his three brothers Russell, George and Jerry. Jack was a World War II Veteran, joining the Royal Canadian Navy in 1943 at the age of 17.

Jack received many awards for his volunteer work including the Lieutenant Governor's Volunteer of the Year Award. Jack touched many lives with his big smile, big laugh and big heart. Friends and family are invited to celebrate Jack's life.

In lieu of flowers, memorial donations can be made to the Toronto Zoo or the Veterans Poppy Fund.