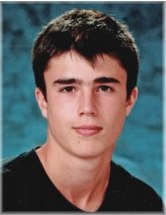 SMITH, Benjamin MacGEORGE   - Much loved by family and friends, passed away Monday, April 16, 2018 in Toronto.

Ben liked to make his friends laugh and liked to listen to their concerns.

He was a thoughtful, deep-feeling person with a love of music and the visual arts. Sadly, he had little more than 22 years among us; he died of an accidental opioid overdose.

Our dear boy was born in Regina on January 29, 1996. The family moved to Halifax when he was four so he and his sister could be closer to their grandparents.

He was also a good student, graduating from Citadel High with Honours and obtaining a medal as the top student in grade 12 in media studies in his graduating year, 2014.

The funeral service will be held at J.A. Snow Funeral Home on Lacewood Drive in Halifax, Friday, April 27th at 2 p.m. Reception to follow. Memorial donations may be made to Big Cove Camp (YMCA of Halifax - Dartmouth, Residential Summer Camps) or the charity of your choice.

Friends in Toronto will remember him with an exhibit of his visual artworks on Saturday, April 28th at the Black Cat Artspace.