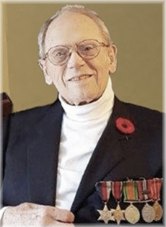 Jack went on to serve in WWII (1941-1946) before settling in Canada, attending Queens University (B. Comm 1951) and joining Ford Motor Company, where he worked until his retirement.

Jack was the beloved patriarch of the Carter family. A devoted husband to Ruth (Switzer) for 70 years and loving father to Virginia (Imants Udris), Ian (Elizabeth Mitchell) and Jennifer (Neil Matson).

One of Jack's most impressive accomplishments was authoring a book about his early days in China while recovering from a severe stroke in 2000.

He will be fondly and lovingly remembered as one of the nicest men people ever met and as a legacy, that is one he would be very proud of.

A celebration of Jack's life will be held at a future date and in lieu of flowers, donations to Diabetes Canada would be greatly appreciated by his family. Arrangements entrusted with Kopriva Taylor funeral home, Oakville, Ontario.