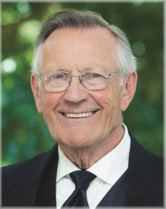 Jack was born on March 31, 1937, in Toronto, to John and Edith (Bowman) Shearing, who emigrated from England.

He had one younger brother, Donald.

Jack served in the Royal Canadian Navy and married Beverley Broneldia Herrington in 1956. They raised two daughters, Lisa-Gaye and Lorraine.

The couple lived in Scarborough and Thornhill until 1984, when they moved to Tulsa. Jack was dedicated to his family. He and Beverley celebrated their 61st wedding anniversary in 2017.

Jack was predeceased by his beloved wife, Beverley. He is survived by daughters, Lisa-Gaye (Michael) Mead of Joplin, Missouri, and Lorraine (Robert) Peters of Chicago, Illinois; and grandchildren, Spencer and Julianne Mead of Joplin. He is also survived by brother Donald (Mary) Shearing, of Whitby, Ontario; and nephews, Bradley (Kristy) Shearing and Kyle (Diana Emond) Shearing; and great-niece, Corinne, all of Oshawa, Ontario.

Memorial contributions to Goodwill Industries of Tulsa are welcome.

A celebration of Jack's life was also held in Tulsa.