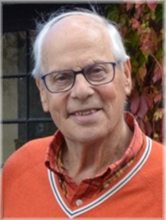 It is with deep sadness that we announce the death of our dear dad. Rijk (Ryk) died surrounded by family from complications due to a fall.

Rijk leaves behind his wife Barbara, with whom he had a gold standard marriage for almost 59 years, full of love, laughter, and adventure.

His son Richard (Sarah MacLennan) and his daughter Sandra (Don Linsdell); his grandchildren, Jamie and Caroline Linsdell, who lit up his life and were a constant source of pride and happiness.

Rijk was the much loved older brother to Kees (Fitan), Dick (Kay) and the late Frits (Liz).

Born in Amsterdam, a superb athlete, Rijk played hockey for the Dutch National team and competed in three world cup championships. He was an elite rower and raced at Henley in 1953.

He completed the renowned Elfstedentocht in the Netherlands. Rijk became a proud Canadian in 1956, and had a successful career in sales with Crain-Drummond. By this time, he had placed his competitive edge on the shelf and enjoyed the sociability of tennis, golf, and sailing.

He was curious, engaged, and charming to the end.

Friends are invited to gather with us at the Toronto Golf Club (1305 Dixie Road, Mississauga) on Wednesday, July 25th from 1:00 to 4:00 p.m. Wear bright colours (orange) and come to celebrate. Rijk's was a life well lived.

In lieu of flowers, donations to the Salvation Army Toronto would be appreciated.