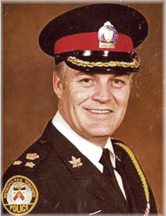 After two years in the British Army, where he learned to be a leader of men and a crushing table-tennis player, Peter immigrated to Canada from England.

After joining the Toronto Police Force, he met a vivacious and caring emergency nurse, Rose Marie, and they began a lifelong romance that held strong for fifty-six years of marriage.

Peter's intelligence and industry led him to be the Deputy Chief of the Toronto Police Force and the Acting Chief of York Region.

During his time on the force, he was a black-belt karate instructor and an opposing foe on the rugby field and volleyball court. Not only was Peter a talented leader and athletic, he was an accomplished craftsman: building house additions, barns and furniture. His skills and generosity meant he was called on often by neighbors, friends and family for issues electrical, automotive and mechanical.

As one of the most talented dart players in York Region, with numerous league-winning trophies, Peter volunteered countless hours as "Mentor Scott" teaching dart clinics at the Chinese Dart Association and the Multicultural Dart Association. But more than that, Peter was an anchor to his family, including his three children: Ann Marie, Dianne and Stephen and their spouses Ian, Michael and Susan.

His most esteemed title was "Grandpa" or "Baba" to seven grandchildren: Scott, Faith, Claire, Matthew, Chantel, Ethan and André.

Our family of fifteen spent many hours together at the "Pond" for celebrations, tractor rides and barn parties. We mourn the loss of this charitable family man. We are glad his pain has ended and every time we think of him, we will be inspired to be kind and to choose integrity.

In lieu of flowers, donations may be made to Covenant House or the Newmarket Food Pantry.