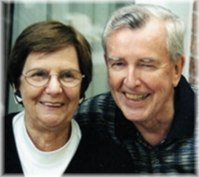 Doreen's legacy is her family.

She will be mourned and remembered with love by her six children and their spouses, Kathy (Brian Ball deceased 2003), Shannon (Tony Pereira), Jim (Jane), Patrick (Maureen), Mary (Rick Secco) and Kerry.

Her grandchildren, Megan (Craig), Amanda (Calin), Mike, Andrew, Alison, Laura and Kim. And her great-grandchildren, Kieran, Emma and Liam. Doreen was predeceased by her parents, Frank and Isobel Hoefer; and sisters, Alice and Ruth. She is survived by her sister Valerie King and family in British Columbia.

A University of Manitoba graduate, Doreen met her "one and only love" Jim at Newman House on campus.

They were married on July 1st, 1950 in her hometown, Lethbridge, Alberta. They spent the next 54 years together working as a team and instilling in their children the values of the faith that sustained them. Doreen had an inherent sense of style and grace and a keen sense of humor.

Doreen's disease never diminished her capacity to express love, joy and contentment even without saying a word. As her Alzheimer's progressed her family relied on the support of many wonderful people to ensure Doreen lived with the dignity she justly deserved.

We would like to thank Suzanne Kallman for her compassionate and steadfast caregiving as well as her loving friendship to our mother over the past 15 years. Thank you to Alda and Lea of Selectacare, who regularly went above and beyond the call of duty.

Thank you to the staff at the Houses of Providence where Doreen resided for the past 11 years, especially RAs Claudia, Janet, Stennette and Cynthia; RNs Elsa and Helen and Dr. McCurrach for their respectful and kind care.

In lieu of flowers, the family would appreciate donations to The Houses of Providence.