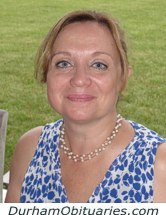 O'SULLIVAN, Nicole Colleen - Surrounded by her family, Nicole passed away at Sunnybrook Hospital Toronto on a sunny afternoon on October 26th, her loving husband (Gordon Paul), daughters (Maggie and Alexandra Paul) and siblings (Maureen Sguigna, Terrance O’Sullivan, Joanne O’Sullivan and Erin O’Sullivan) by her side.

She was predeceased by her beloved father Paul O’Sullivan and mother Suzanne O’Sullivan (nee Gauthier).

Nicole lived a full, adventuresome and complete life on her own terms.


Her intellect and curiosity led to a lifetime of learning and discovery, ultimately leading to a wide-ranging, successful and impactful career in teaching in both British Columbia and Ontario. She cared deeply about her students and fellow staff members and this is reflected in the immense respect she garnered from both over the years.

Her curiosity also led to a myriad of interests – she was an accomplished pianist and renowned music enthusiast (meeting Gord when they volunteered at the Vancouver Jazz Festival), an exceptional skier (resulting in a memorable “shoulder” year on the slopes of Lake Louise), seasoned traveler (not touching the African continent being one of her few regrets), avid gardener (a house surrounded by colours and scents) and expert martini maker (vodka, dry, with a twist and a rock or two thank you, very much) counted among them.

Her compassion for others, strong presence in the community and concern over broader social issues was always evident. From protesting in support of a cause (which included making her kids raise the occasional protest sign on a street corner) to sponsoring children through Plan Canada, sitting on parent committees at her daughters’ school or training her beloved wheaten terrier Mickey O’Flynn as a therapy dog for use in a host of school and community programs, Nicole did something about things that she felt deeply about rather than just talking about them.

She was one of life’s genuinely funny people – she inherited her father’s quick Irish wit and added a touch of her own sauciness. She was engaging, gregarious and highly entertaining as those many people drawn in by her gravitational field can readily attest.

Ultimately though, her greatest joy and source of pride came from the big, boisterous family that she was a part of, the passionate love affair she shared with her husband and particularly the very fine young women that her daughters have become – raising them to thrive and be the people they now are.

She never allowed the challenges that she faced courtesy of a fourteen year long dance with the breast cancer devil to define who she was as a person or how she led her life; her stoicism, toughness and no nonsense approach enabled her to dictate the terms of her life to her disease and never the opposite.

99 King Street West, Bowmanville, ON. In lieu of flowers, donations are requested to Therapeutic Paws of Canada:   www.tpoc.ca.